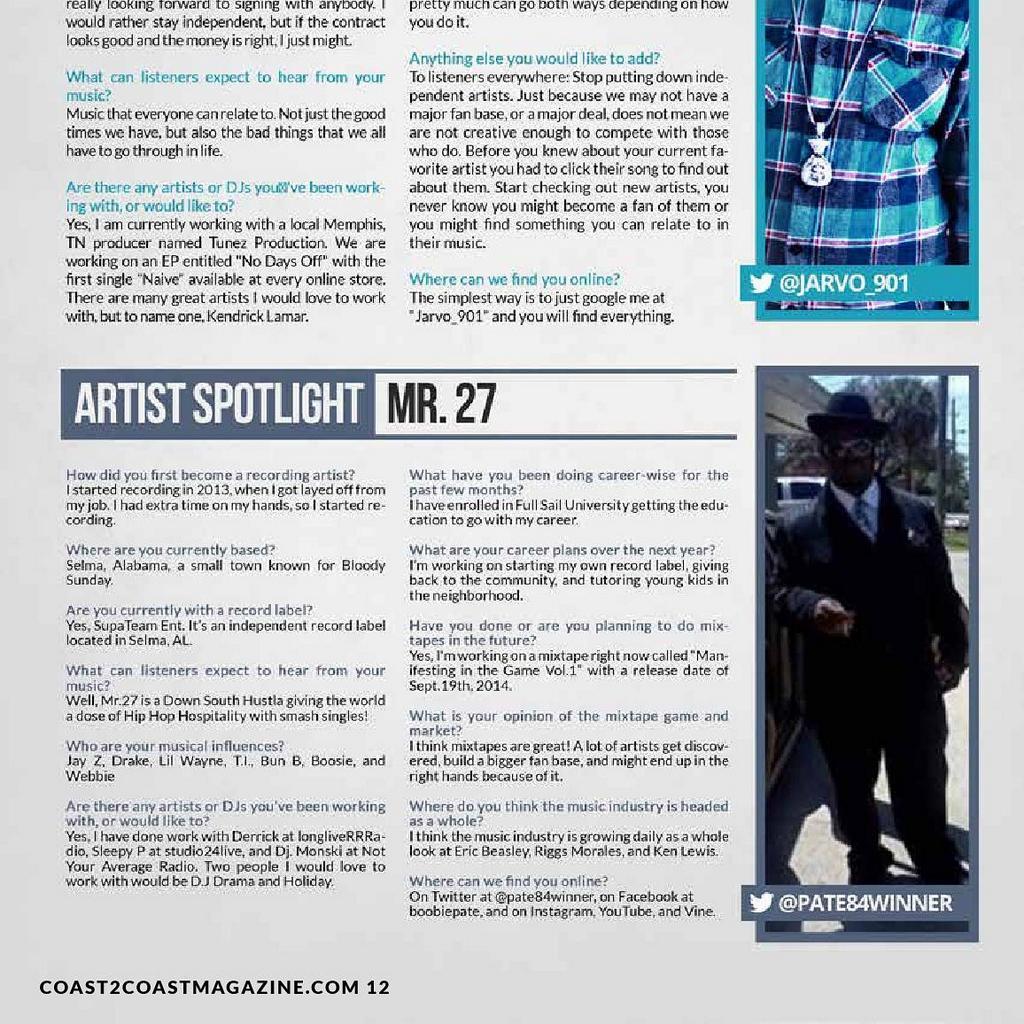 Coast2CoastMagazine.Com recently did an  artist spotlight on Mr 27 (see here) and we just had to shout out both for the love! Thanks!!

Born in New Orleans, raised in Denver and hailing in  Los Angeles, where he is gaining notoriety among hip hop circles for his strong lyrical content & smooth, resonating voice. Currently he is promoting his current project

He is the voice of a struggling people. He is the voice of the father’s, the mother’s, the kid’s, the disenfranchised and oppressed. He gives freedom a voice. He encourages you to wake up and reclaim your freedom. No matter how small and insignificant it is he insists that you do something!

Visit him online at – http://thejerknation.com/

Check out Zo The Jerk on Rhythm Rave Radio with 13 new tracks and a message for the nation with his new release “Live The Reality Show”!

Jay Watts is a 22 year old artist based out of New Jersey. He’s been making music since he was 10 years old, and he is the winner of the Most Real Awards, Dopest Alive Award&, & Last Wonder of the World Award, His hit Top 25 WRRR single ‘Younger’ is from his upcoming EP entitled “Last Wonder of The World”

Her sophisticated neo-soul vocal style includes elements of R&B, hip hop, reggae and world beat and her unique songs capture meaningful messages which are delivered both true and compelling.

Queen Nyoka’s vocals, grooves and production on the album are raw, smooth and at times bass-heavy. The songs are thought provoking and you will want to groove, chill, dance, snap your fingers and bop your head as you feel the beat. Her delicate phrasing sets her apart from the many cookie-cutter artists being released today. Her recording years span over a decade and though many demos have been produced by her in the past this album will be her first debut full release appropriately titled “Renaissance Woman”.

Her mature, emotional, philosophical, sociopolitical writing style is original, genre-busting refreshing and the entire album offers a range of wonderfully produced tracks which also welcomes the outstanding vocals of Andre Jones from the beloved San Francisco band The Latrells, harmonies of Sweet T and smooth vocals of Bluezy.

Queen Nyoka is driven by her desire to create and share music for the people of the World, not just for the money and not at all the fame, it’s pride and self-empowerment that provokes her anthems. Her talent is real, it’s true and you just can’t help but enjoy the experience of listening to her.

Pada Escobar hails from Boston, MA and is the CEO & founder of B.O.M.B. ENT. This rising star consistently produces quality music. His bangin’ single ‘Since Day One’ has been on Rhythm Rave Radio’s Top 5 for two months! Check out the complete mixtape online on Soundcloud and Datpiff.com

This amazing singer/song writer has shared the stage with Erykah Badu, Yolanda Adams, Patrice Rushen, Peter Cincotti, Kurt Elling, Dave Koz, and many others. After American Idol’s 2012 season, she released her first album; Stretch Marks. SuCh has also had her acting debut as Celie in the Color Purple and received a Henry Award for Outstanding Actress In A Musical. She is currently riding a wave of excitement surrounding her current single ‘Sugar Maple’

From humble beginnings, Toronto native Jermaine Dunkley, professionally known as J Noble, emerged onto the music scene against all odds. Raised in Rexdale’s Kipling and Mount Olive community, J Noble’s talent began with basketball. Making the first ever All-Canadian All-star Team, he earned a full 4-year scholarship to the University of Nebraska.
However, coming from a community where the streets provide a quick and easy means of making money, J Noble found himself caught up in the fast and dangerous lifestyle, with which athletics were unfortunately not compatible.
Unbeknownst to him, this very lifestyle would lay the foundation from which his passion for music would eventually flourish. Having lost countless friends and relatives to the streets that once consumed him, J Noble knew that if he continued going down the path he was on, he too would eventually fall victim to the streets.
At a critical point, he realized that it was time for the trajectory of his life to change. Needing inspiration for material, J Noble knew that the best source would come from his own life experiences, which continue to fuel his artistic expression. His raw emotion, inexhaustible drive and harsh disappointments have all contributed to his lyrical content and prowess, catapulting him to heights. In a short span, J Noble has created a massive buzz across the G.T.A. which has been evident in his popularity on the net and the success of various mix tapes. With 3 heavy hitting videos, and plans of unleashing an upcoming mix tape entitled Real Life Drama, J Noble has established himself as a force to be reckoned with.
As CEO of Monstarz World INC, he feels that “any person that has been through what I been through or has seen what I’ve seen, usually isn’t around long enough to speak about it. I consider them Monstarz.”

This smooth but electric Diva Princess, has been has been #1 on Rhythm Rave Radio’s top 25 with the smash hit single
‘L-O-V-E’ for last month! This Neo- Pop sensation has many hit singles including ‘Walk of Shame’ She is destined to shine and her talent is undeniable!

“Sharrief” as a U.S. DISTRIBUTION PROMOTION & MARKETING Deal with ATTACK MEDIA GROUP/ DEEVEL/ CHERRY LANE MUSIC INTERSCOPE/UNIVERSAL MUSIC GROUP SHARRIEF PRODUCER /SINGER/SONG WRITER OF I’M ORIGINAL As 5 LICENSING AGREEMENT DEALS A Wind Mobile Cell Phone Deal CANADA/USA And Another Music Placement Agreements Deal USA Korea Star Search Media (SSM) And Shanghai Media Group (SMG) One of Asia’s largest Entertainment Companies and New Music STREAMING SERVICE WOWLOUND Sharrief is a writer for BMI (Broadcast Music, Inc.) and currently handles all of NJ Five’s booking and promotions. He started in Hip-Hop as an emcee in the late 1980’s. His youthful style and unique voice made him an instant hit in his neighborhood of Paterson, New Jersey. Through the years, Sharrief has worked and performed with notable artists such as Red Head Kingpen,who helped Mr. Thomas and his brother land a single deal with Atlantic Records under the moniker “Funky Righteous.” Later, Mr. Thomas became part of Eddie Murphy’s brothers rap group called K-9 Posse and they toured with several R&B and Hip-Hop favorites such as Bobby Brown, KRS One, MC Hammer, Kid N’ Play, Salt N’ Pepa, Rob Base, Kool & The Gang, and many others. The experiences Mr. Thomas gained on tour makes him an authority on the sound and presentation of music. Forming part of his vision to create the current INE (Iron Nation Entertainment, inc.) team as early as 2008 as a result of his eye for detail and familiarity with the changes in Hip-Hop and R&B over time, Mr. Thomas’s role as CEO of INE is an essential ingredient to and the cornerstone of the implementation of the INE Plan.

Submissions for music to:
submitmusictowrrr@gmail.com